From a Certain Perspective I Suppose 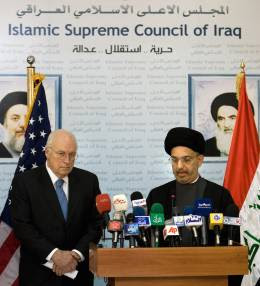 Blake Hounshell is funny. Next to the picture on the left, Blake included this caption:

Successful indeed if you're a Shiite fundamentalist group that was exiled in Iran (ISCI), whose political organization and militia were formed, funded, trained and indoctrinated in Iran and that still maintains extremely close ties to Iran. Successful, also, for Iran. The rest of us? Not so much. As if on cue, soi disant foreign policy expert John McCain weighed in:

Yeah. An early withdrawal would jeopardize all that success wouldn't it.

From a Certain Perspective I Suppose